As a follow up to our recent article on the CEF Designation for Metal Finishers we are posting a three part article on the history of training programs for the metal finishing industry.  The article was written by Master Surface Finisher and AESF Fellow, Mr. Frank Altmayer and was originally published in the March, April and May 2009 editions of Products Finishing Magazine.  I think that you will find them to be both informative and entertaining.

It is no secret that 2009 marks the 100th anniversary of AESF Foundation (formerly AES).  To mark this milestone, I began a series of articles which look into the history of education in the art and science of electroplating and surface finishing.

As noted last month, the CEF training course pre-dated the CEF exam.  From 1972 to December of 1976 students attended the class and were given a certificate of completion.

Richard G. Baker (L) Chairman of the Technical Education Board, and Education Committee Chairman Harry J. Litsch agree that the new AES program, leading to the title of “Certified Electroplater-Finisher” is a worthwhile member service.

What is the AES Voluntary Certification Program?

It is a program through which a person may receive extra recognition from his peers and highlight his professional achievement level.  By successfully completing the examination prepared by the AES Education Committee and meeting certain basic requirements, he will be provided with a credential that certifies he has surpassed the “minimum” level of technical competence in the field of plating and surface finishing.  The key word, I believe, is “voluntary” – the person who desires to have this proof of his technical ability obtains it through his own initiative, under the auspices of AES.

Who is eligible to apply for the examination?

Anyone who has a high school diploma or minimum of three years experience in the field of plating and surface finishing.

Can you describe the examination?

The examination is a comprehensive test which covers several areas: fundamental chemistry, electricity and electrochemistry, various types of plating, rinsing techniques – about 19 basic areas.  The question format will be varied: there will be true-false questions, multiple-choice, matching, fill-in-the-blank and problems to solve.  The examination will be proctored – it is not an “open book” test.  Applicants will be given a maximum of two hours to complete it.

When will the first examination be given?

If several people apply early enough, the first examination could be arranged on January 27 in Chicago, following the AES Second Continuous Plating Seminar.

If I fail the examination, may I take it again?

What are some of the ways I can prepare myself for the exam?

Many options are available; it is recommended that an individual study the AES Illustrated Lecture Series, take an AES Intensive Training Course or enroll in the new AES Correspondence Course which will be offered in January.  Provided they cover the examination areas listed in the VCP brochure, one may also rely upon branch, university or private correspondence courses.

Richard G. Baker (L) Chairman of the Technical Education Board, and Education Committee Chairman Harry J. Litsch agree that the new AES program, leading to the title of “Certified Electroplater-Finisher” is a worthwhile member service.

Can I obtain certification through a “Grandfather Clause?” 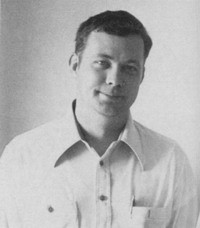 Wayne L. Wheeler of Waynesboro, VA and a member of the Natural Bridge Branch, was the first person to become a CEF by passing the examination.

Yes – if you have a minimum of 15 years experience in the field of plating and surface finishing.  We encourage our members to take advantage of the Grandfather Clause and use the application we’ve enclosed here to apply immediately.

Is there a deadline for applying for certification under | the Grandfather Clause?

We will accept “Grandfather” applications up to December 31, 1977.  Certificates granted under this clause will be temporary, dated to expire on January 1, 1981.  An AES member who will celebrate his 60th birthday before January 1,1981, however, will be granted a non-expiring certificate.

As a result of the grandfather clause and the first nine examinees, AESF had 32 certified Electroplater-Finishers as of May 1977. 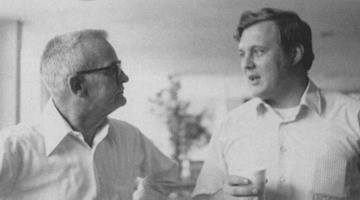 David Roach of the Orlando Branch successfully completed the AES Intensive Training Course and the CEF exam given in conjunction with it in February. Here he talks with instructor Don Swalheim.

The original CEF exam had 168 questions and nine problems covering 19 subjects.  The exam was two hours long.  Today’s CEF exam contains 188 questions and 12 problems.  It covers 22 subjects and takes 2.5 hours to complete.  As of today nearly 5,000 CEFs have been granted and no examinee has tallied a perfect score.  Mr. Chuck Goodrich (deceased) holds the record highest score of 99.5%.

AESF wishes to thank all those individuals that have served as instructors over the years.  I have no detailed records allowing me to provide an all inclusive list of past and present instructors.  A partial alphabetical list is provided below.  If you served as an instructor and are not listed here, I apologize for the omission and request that you please send me your information and I will publish your name in a future article in this series.