As a follow up to our recent article on the CEF Designation for Metal Finishers we are posting a three part article on the history of training programs for the metal finishing industry.  The article was written by Master Surface Finisher and AESF Fellow, Mr. Frank Altmayer and was originally published in the March, April and May 2009 editions of Products Finishing Magazine.  I think that you will find them to be both informative and entertaining.

It is no secret that 2009 marks the 100th anniversary of AESF (formerly AES).  To mark this milestone, I decided to conduct a bit of historical research on the subject of education in surface finishing and I hope to bring some interesting articles and individuals to you in the next few months.  In the November, 1948 issue of Plating (precursor of Plating & Surface Finishing), I found a very entertaining and historically informative article written by George B. Hogaboom, half of the duo that is considered to be the Mickey Mantle and Roger Maris of plating education.  Except for the introduction, the following is a verbatim reprint of Mr. Hogaboom’s article titled “Early Course in Electroplating.”

Probably the first course in electroplating was started in Newark (N. J.) Technical School in 1889 by its Director, Charles Colton, a pioneer in industrial education.  It was suggested by Dr. Edward Weston, a trustee of the school and well known for being the first to have added boric acid to nickel plating baths and to have developed the low-voltage DC generator.  The instructor was James N. Morehouse, owner of the largest job plating shop in Newark which was often used as an experimental plant for Hanson Van Winkle Company.  Mr. Abraham Van Winkle, president of that company, had recommended Mr. Morehouse for the position.

The two-year course required four evenings a week: two in electroplating and two in chemistry.  The chemistry course was under the direction of Mr. C. Harding, a pharmaceutical chemist.  The instruction consisted of general lectures, laboratory work in qualitative analysis and plant visitations.  Of the latter, one was to the Morehouse plant and another to a brewery where a lecture was given on the principles of organic chemistry.  No analysis was made of plating baths.

In the electroplating room there was a double nickel salt solution, a cyanide copper solution, and an acid copper solution called a “duplex” solution, probably because both the cyanide and the acid solution had to be used on most work that was plated.  A polishing jack, a buffing lathe, an immersion alkali cleaner and a scrub brush completed the equipment.  The formulas for the solutions were from an early edition of “Langbein” and some special secret ones that were given by word of mouth.

The instruction consisted of the replating of any work that the students had supplied.  Each student brought what he could find or a piece from the factory where he was employed; if he did not have any, he watched how the refinishing and plating was done by others according to the method outlined by the instructor.  If the plating or finishing were not acceptable to the instructor, it had to be done over again, and thereby the student learned where he had been lax and what to watch out for in reprocessing the piece.  If the article did not stand refinishing, then the student brought another.

In the second year it was permitted to silver plate, and that brought many knives, forks and spoons from the student’s home and gave him the opportunity to display his ability as an electroplater; the piece of which he was proudest was always the cruet stand.  Silver plating was not done until my first year in the course, in 1902, when it became known that I had been with the International Silver Company.  The class tried to make a silver solution but had no success in “cutting down” the silver with nitric acid.  My assistance was requested, and at the following session water was added to the nitric acid and the silver went into solution.  Chloride of silver was then precipitated and taken into solution with potassium cyanide according to Langbein, which gave a working bath.  The boys worked overtime that evening to plate at least one piece to take home.

The instructor requested me to wait until after the students had left and then offered me the position of taking charge of his job shop.  Since I had perfected a process for producing “Royal Copper” for a silver concern that had persuaded me to live in Newark and since this concern was in the middle of the Fall trade, the position offered by Mr. Morehouse was not accepted until January, 1903.

As foreman or rather superintendent of the instructor’s job shop, it was not thought necessary that I attend the classes in electroplating; private instruction in pharmaceutical chemistry was deemed more advisable and I almost became a drug clerk or more probably, a “soda jerk.”

After about three years in the job plating shop, a position which involved silver plating on glass was offered and accepted.  In 1909 I was requested to finish the course in electroplating at Newark Technical School.  After the graduation exercises in May, 1910 a dinner was given by the alumni to the then “baby class” of the school which consisted of the graduates in the several industrial courses.  As president of the class I had to respond to the address by the Director, Charles Colton.  His reply was my appointment as instructor to succeed Mr. Morehouse.

A new building had been constructed and in it was installed a new electroplating room.  Through the courtesy of a number of friends of the school, the room was well equipped with a new generator, new tanks, new lathes, a sand blast, a lacquer spraying outfit and electrical instruments.  It was a pleasure to teach for three years the fine young men who were students.  Outstanding among them were the late beloved Oliver Sizelove and Van Winkle Todd.  Here I also learned how little I knew about electroplating!

Last, the following 1949 cartoon might as well have been printed today. 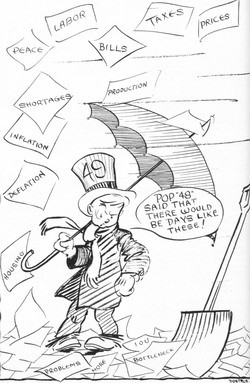